Caparezza, a musician lost in Cinema

We are going to consider the ability of Caparezza to play with texts and music on the meaning of “sense”. Deleuze in “Sense’s logic” writes that each word need an other word to express his sense, Caparezza in his last album tries to find a word with a re-ferential sense, without the need of toher words, a “mute word”. This is why ne needs to loose himself.

It is since 2019 that Caparezza seemed to be disappeared, but now he came back with a very original album, with a “meditative” concept.

To talk about this album we have to expose in few lines the artistic career of “Caparezza” (artistic name for Michele Salvemini). Michele started in 90ies with the name “Mikimix”, a shadow of himself that he denied. From this denial Caparezza born. Caparezza walk accros different mutations: death and spiritual realization in “Habemus Capa”, a “musem phase” in “Museica” and a an ending in “prison” (“Prisoner 709”). It is going out from this prison that started “Exuvia”, this new album. This is why the cinematographic references to “italian neorealism” is so important for this album: even “neorealism” was trying to leave “mental prisons” of classic cinema, leaving the world of ideologies and discovering a world unrecognizable, in which we are like vagabonds.

Why in this album Caparezza makes a strong reference to Cinema?

In particular Caparezza has declared to be inspired by last script of Fellini “The journey of G.Mastorna”, a script never realized, considered one of the most big project of the neo-realist director. In a song (“eterno paradosso”) he make an explicit reference to an other similar film: 8 1/2. The name of this film has a double meaning: it cames after 6 film and 3 co-directed, and it is refered to a film without a title, the one that the protagonist  has to realise with a lot of doubts. Both films, the one of the protagonists, and the film itself, is full of doubts, and confusion. The “Mastorna”, on the other hand, tells the story of a musician that after a strange airplane’s accident find himself in a strange place that seems to be the “afterlife” but it is not coherent, and more confused than life itself.

The emblematic quote taken from 8 1/2 (quoted in “eterno paradosso”) is: “I have nothing to say, but I want to say it anyway”. In Fellini’s films there is always something confused that wants to be expressed, it is what Gilles Deleuze called “pure past”, the “unconscious” rest of each present that passes. This is also why Fellini is so interested in writing his dreams and sometimes in drawing and shooting it. What differs from other neo-realistc authors is that in Fellini the real vagabond is this “pure past”. Caparezza refers to this because he find himself too lost in a land that is even lost: the pure past. This is why the penultimate song give expression to the Time itself (“Zeit”), but we are going to better see later this passage.

In “Eyes wide shut” Caparezza says “I dont’ want to find myself because I am in dangeours to really find me”. This is crucial because if he find himself in a lost land he became more lost than before! The reference to “eyes wide shut” is an other cinematographic reference, it the last Kubrick’s film. Kubrick is known to build stories in which we are not able to judge who is the true author, as in a “panic experience” (total identification with the whole) in which only a distructive innocent force operates. Only in the end of “2001, A space odissey” Deleuze writes that we can see a possible re-coincilation of this destructive force in a new world. 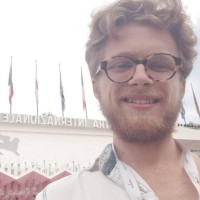